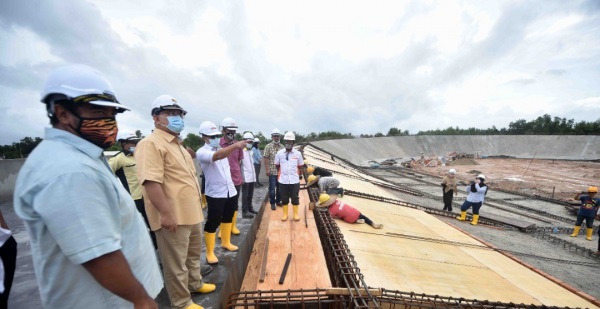 Dungun: Following the opinion voiced by the Deputy President of the Terengganu Cycling Association (PLBT), Mazlan Md Jali regarding the Azizulhasni Awang Velodrome in Dungun today, the Chairman of the State Youth, Sports and Non -Governmental Organization (NGO) Development Committee, Wan Sukairi Wan Abdullah appeared to give an explanation.

“This is a project that was set a long time ago so the specifications and related matters have been decided at the KBS level because they are the owners of the project.

"It's just that when we take over the Terengganu state administration in 2018, we are working to get the construction of this velodrome to be implemented," he said when contacted by reporters, today.

He added that he also attended the project site last November and acknowledged the existence of issues raised by Mazlan.

"We were informed, that is the situation because it was built for the purpose of cycling training in Terengganu.

“There are no spectators, no roofs and no entrances for ambulances as well as athletes.

“We also asked for a modification to be made so that the ambulance can go inside in the event of an accident and make the entrance at the bottom.

"But, it involves the issue of changes in specifications and budgets, in simple language we have to just accept what has been done with a few suggestions for improvement from us," he said.

He added that the state government has gazetted 4.5 hectares of land and the velodrome site only takes up half of the available land area.

“It means we have a lot more space that can be used,” he said.

For the record, the RM11.8 million project was also postponed following protests from locals over land acquisition in 2010.