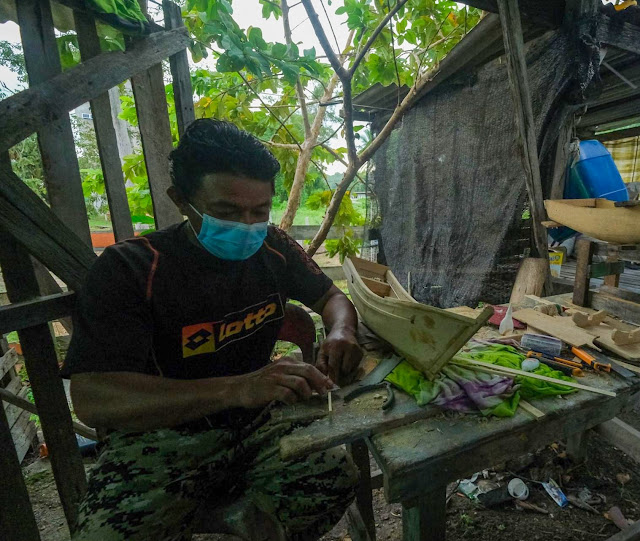 MARANG: Mat Nor Abu Bakar, 43, from Bukit Gasing, here is able to increase his family's side income.

Mat Nor, who works as a fisherman, considers the skills he has acquired since school to be a valuable award.

He said he remembered first carving while sitting by the river and looking at small fishing boats, then he used the fog according to what he saw.

"The current demand is very encouraging and usually the people who order and buy are also from the fishermen themselves, apart from the residents of Terengganu who are interested in carvings for decoration," he said.

According to him, the boat carving job he did for more than 20 years starting at the age of a dozen was a part -time job after he returned from the sea to earn a living, or during the monsoon season hit where fishermen did not go out to sea.

"Among the boats that have been carved are small boats, deep sea boats, trap boats, trawlers and mining boats. Small boats, I sell for RM300 while large boats have so far also reached a price of more than RM3000.

“These boats are carved using island wood that can be found in the surrounding area which usually takes time to complete, which is less than one to more than three months, depending on the situation,” he said.

He added that some of the carved boats are also made complete by installing a real engine that can be carried to play on the water or sea using 'Remote Control'.

"I am also very concerned about the quality of the sculpture, where the creation should be similar to the actual appearance of the boat, and the process also takes time in addition to the need for modern equipment," he said.

Meanwhile, the Special Officer of the Rhu Rendang ADUN Community Service Center, Nasaruddin Samsudeng, said that his party visited the entrepreneur to channel some assistance to him this morning.

"We also intend to highlight the skills he possesses at a higher level with the cooperation of the Terengganu Entrepreneur Development Foundation (YPU) as well as other assistance that can be utilized," he added.