Home Football Messi's salary is still the highest in the world

Messi's salary is still the highest in the world 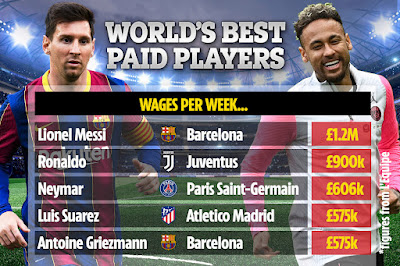 LONDON: Lionel Messi is still the highest paid footballer in the world - despite receiving half of his previous salary at Paris Saint -Germain.

According to a list compiled by French newspaper L'Equipe, the Argentine star is also far behind his PSG team -mate and former Barca team -mate Neymar with £ 31 million (RM181.77 million) a year.

In fourth place is one of the greatest fighters in the club's competition, Luis Suarez who is famous when he teamed up with Messi and Neymar at the Nou Camp.

The Uruguay striker reportedly took home £ 575,000 (RM3.37 million) a week as he prepares to continue his second league season with champions Atletico Madrid - and he is tied with French Barca striker Antoine Griezmann.